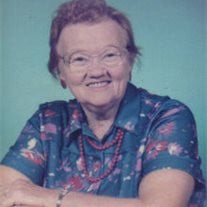 KUTTAWA -- On Tuesday, August 26th, 2014 at 6:17 p.m. Ruby Tylene Whalen Kingston of Kuttawa went home to be with her LORD and Savior Jesus Christ while at the Caldwell County Medical Center in Princeton. Ruby was 91 years of age having been born on August 10, 1923 in the Land Between The Lakes area of Lyon County. She was a homemaker and a member of Pleasant Hill Baptist Church. The church is located at 3902 State Route 93 South of Eddyville. Ruby worked for several years at the former Arvin Industries plant in Princeton and at the former Shawnee Plastics plant in Kuttawa where she retired. After retirement she worked for a period of time as a "meals-on-wheels" delivery driver for the senior citizens center in Eddyville and, also, as an employee at Willow Pond Restaurant in Eddyville. Her hobbies included working in the garden, quilting, and enjoying farm life. She is survived by nine of her ten children, Phillip Thorning and his wife, Rosie, of Paducah; Jane Greer and her husband, Harold, of Bowling Green; Mary Sheridan and her husband, Joe, of Princeton; Barbara Hall and her husband, Harold, of Eddyville; Rebecca Jackson of Kuttawa; Charles Kingston of Paducah; Wayne Kingston of Kuttawa; Gerald Kingston and his wife, Sara, of Princeton; Gregory Kingston of Reidland; and several dozen grandchildren through great-great-great grandchildren consisting of six generations. She was preceded in death by her first son, William Luther Thorning; her first husband, Chester Luther Thorning; her second husband, Charlie Morgan Kingston; her brother, Kinoth Whalen; and her two sisters, Sylvia Timmons and Mamie Ruth Whalen. Her parents were William Burton Whalen and Myrtle Whalen from the former 'between the rivers' community of Star Camp. Visitation will be Thursday evening, August 28th, from 4:00 p.m. to 7:00 p.m. at Dunn's Funeral Home in Eddyville. The funeral will be Friday morning, August 29th, at 11:00 a.m. at Dunn's Funeral Home. Brother Robin Redd, Brother Bobby Jackson Sr. and Brother Eric Nelson will be officiating. Burial will follow with the graveside service at Macedonia Cemetery of Kuttawa. A meal will follow at the Pleasant Hill Baptist Church fellowship hall located at 3902 State Route 93 South, Eddyville, Kentucky. Expressions of sympathy may take the form of contributions to: Pleasant Hill Baptist Church building fund, P.O. Box 1611, Eddyville, KY 42038.

KUTTAWA -- On Tuesday, August 26th, 2014 at 6:17 p.m. Ruby Tylene Whalen Kingston of Kuttawa went home to be with her LORD and Savior Jesus Christ while at the Caldwell County Medical Center in Princeton. Ruby was 91 years of age having been... View Obituary & Service Information

The family of Ruby Whalen Kingston created this Life Tributes page to make it easy to share your memories.

Send flowers to the Kingston family.