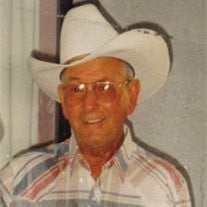 Thomas W. (Tom) Lummus, age 87 of Grand Rivers, died at 9:26 pm Tuesday, February 9, 2016 at the Ray & Kay Eckstein Hospice Care Center in Paducah. He was of the Baptist faith and belonged to the Operating Engineers Local #181 in Henderson.... View Obituary & Service Information

The family of Thomas Watson Lummas created this Life Tributes page to make it easy to share your memories.

Send flowers to the Lummas family.