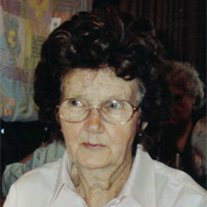 Trela M. Oliver, age 96 of Eddyville, died at 12:45 pm Wednesday, June 22, 2016 at Christian Care Center in Kuttawa. She was one of nine children born to Chester and Mamie Thorpe McCracken. Mrs. Oliver was a member of Pleasant Hill Baptist Church in Lyon County and had retired from Arvin Industries Inc. when it was located in Princeton, KY after working for years as the supervisor in the cafeteria at the Lyon County Schools system in Old Eddyville and after relocating to New Eddyville. She was preceded in death in 2007 by her husband of 68 years, Boyd Oliver, one son Patrick Oliver, three sisters Dora Holland, Mary Wynn, Myrtle Jones and three brothers Willis McCracken, Wayne McCracken and Lerollin McCracken. Her parents were Chester and Mamie Thorpe McCracken. Survivors include two daughters Phyllis L. Nicholson of Eddyville, KY, Janice E.Thompson of Oklahoma City, OK, one son H. B. Oliver of Dyersburg, TN, one sister Roberta Runkle of Ft. Wayne, IN and one brother Charlie McCracken of Newburgh, IN. Also surviving are ten grandchildren, six great grandchildren. Funeral services will be held at 11:00 am Saturday, June 25, 2016 at Dunn's Funeral Home in Eddyville with Rev. Robin Redd and Rev. Clay Hall officiating and burial will follow in Pleasant Hill Cemetery. Friends may call from 5 until 8 pm Friday at Dunn's. The family has ask that expressions of sympathy take the form of donations to Pleasant Hill Baptist Church or Kosair Children's Hospital in Louisville, KY.

The family of Trela Oliver created this Life Tributes page to make it easy to share your memories.

Send flowers to the Oliver family.