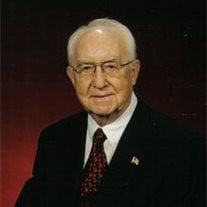 William Glenn "Bill" McConnell, age 90 of Kuttawa, died peacefully at 8:30 am today, February 16, 2015 at his home in Kuttawa. William was born in Marion, KY, on April 4, 1924. He was a graduate of Marion High School, where he was captain of the '42 football team. William graduated fro the University of Kentucky School of Pharmacyin 1951. He owned and operated McConnell's Drug Store from 1954 until retirement in 1989. William is a World War II veteran, having served in the European Theater from 1943 to 1945. Having been awarded five battle stars, he was among the soldiers who landed on Utah Beach in June of 1944. William was a faithful member of Kuttawa United Methodist Church, where he sang in the choir for many years. Throughout his life, William was involved in volunteer work, including the American Red Cross and the Kuttawa Volunteer Fire Department. He served on the Kuttawa City Council for 18 years, and later served as mayor of Kuttawa from 1973 to 1981. William was known for his kindness and generosity throughout the community. He was sincerely loved by his family, friends and all who knew him. William is preceded in death by his parents, Homer and Nonie Bell McConnell, and his sister, Betty Jane Clement, and her husband, Joe Bill Clement. He is survived by his wife of 67 years, Grace Shelby McConnell , of the Home; son, Thomas Glenn McConnell, Kuttawa; daughter Carol McConnell Rogan, and husband Michael, Rogersville, TN; granddaughter Rachel ShelbyRogan, Knoxville, TN, nephews, Bob Clement and Rick Clement and wife Karen, all of Cadiz, KY, John Shelby and wife Kristin, St. George Island, FL, Jim Shelby and wife Ann, Frankfort, KY, Bob McClain, Vail, CO and niece Deanna Phelps Baltimore, MD. Funeral services will be held at 11:00 am Saturday, Feb. 21 at Kuttawa United Methodist Church in Kuttawa with Rev. Ken Harp and Rev. Jim Keegan officiating and burial will follow in Kuttawa Cemetery. Friends may call from 4 until 8 pm Friday at Kuttawa United Methodist Church. The family has ask that expressions of sympathy take the form of donations to Kuttawa United Methodist Church. Dunn's Funeral Home in Eddyville is in charge of arrangements.

William Glenn "Bill" McConnell, age 90 of Kuttawa, died peacefully at 8:30 am today, February 16, 2015 at his home in Kuttawa. William was born in Marion, KY, on April 4, 1924. He was a graduate of Marion High School, where he was captain of... View Obituary & Service Information

The family of William "Bill" McConnell created this Life Tributes page to make it easy to share your memories.

Send flowers to the McConnell family.